Internals of quartz wristwatch "Luch" - and some overclocking

There are some things which were around for so long, that we got used to them and take them for granted. At the same time sometimes they are much more complicated to design and manufacture.

My personal favorites are quartz wristwatches and film cameras. They only became accessible to everyone because hundreds of billions of dollars in R&D expenses were spent there in the past 1-1.5 centuries.

I'll take a look at quartz wristwatch this time. I'll look inside "Luch" wristwatch which I got during my school times.

Watches itself looks simple and ascetic. Wires are mine. You'll see why at the end of the article:

On the back side we can see an IC which generates 32768 Hz signal with a quartz, and outputs 0.5Hz signal. This signal is feed to a coil with insane number of turns (2.5kOhm resistance), which actuates the mechanics. 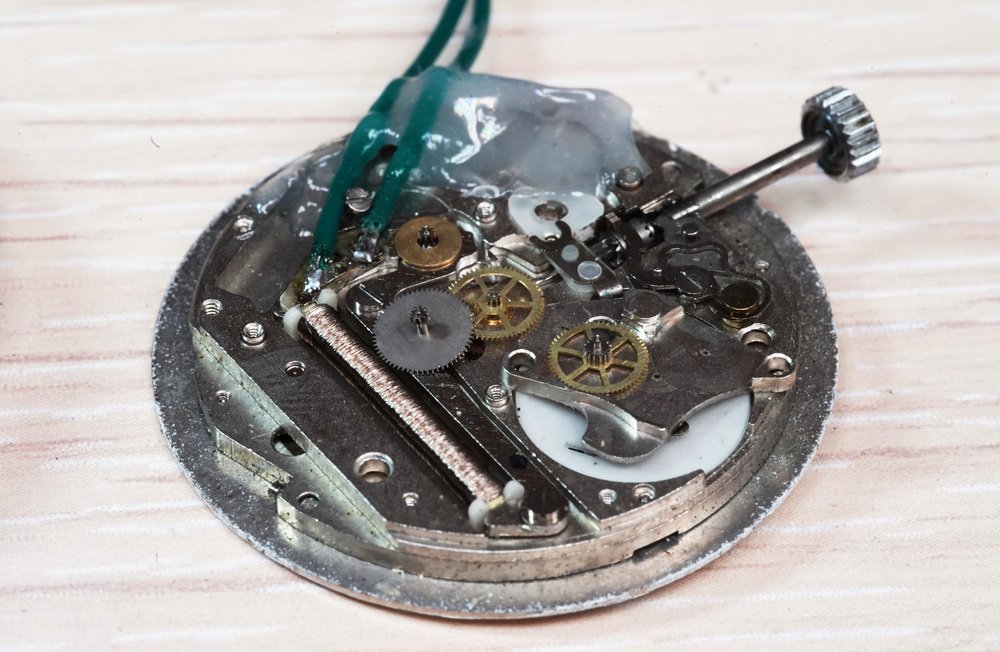 Surely we'll take a closer look at IC (clickable). It looks like at the bottom there is an quartz oscillator, in the middle - 16-stage divider. Snake at the top is high-value resistor.

Now let's take a look at quartz: it's classical tuning-fork in metal case, sealed by glass. Electrodes are deposited on the top: 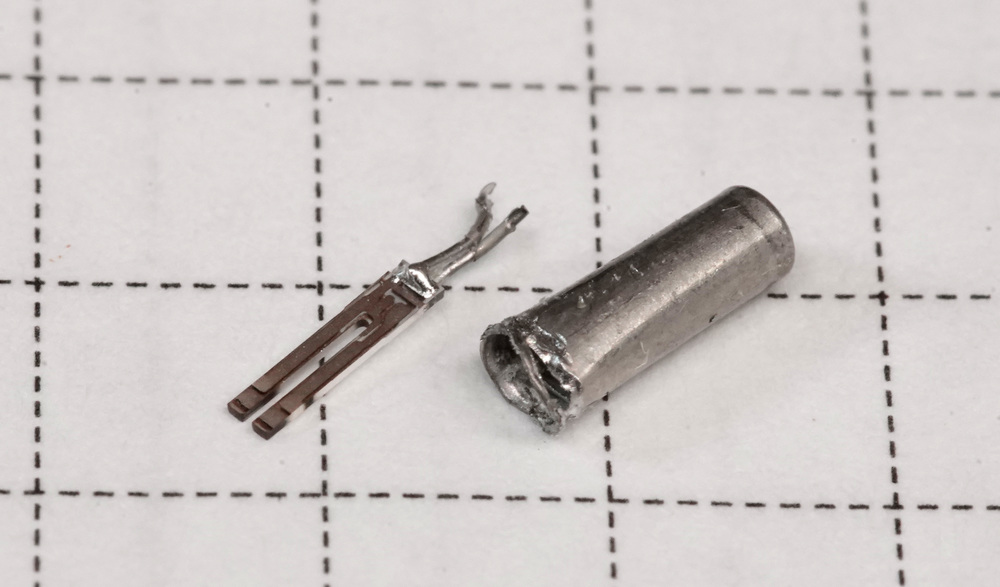 One can spot dark line at the edge of the quartz... Let's take a closer look (clickable): 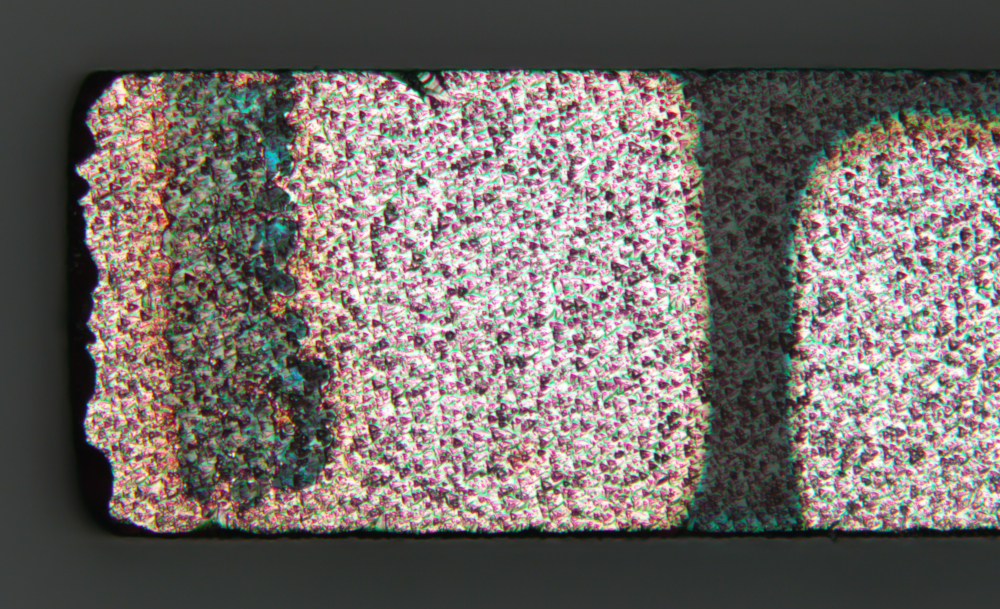 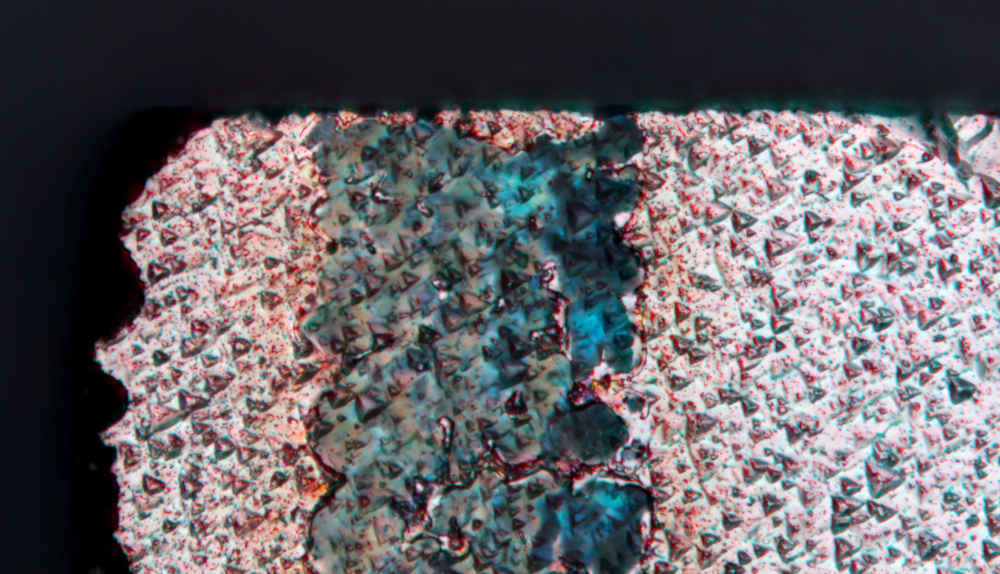 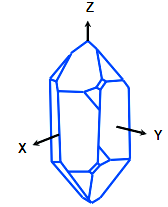 It looks like frequency of the quartz was fine-tuned by Q-switched laser. Before lasers quartz crystals were tuned by slowly lapping which was very tedious job (given 0.004% frequency tolerance).

But why there are pyramids over whole area of the quartz? Quartz crystals for wristwatches are cut on XY axis. When you process crystals (etch, grind) - they sometimes show anisotropy of their properties (etch rate or ease of chipping), which in this case left these nice pyramids in Z-direction.

Ability to pick arbitrary cut axis is what made quartz so ubiquitous. Different axis show different dependency of resonant frequency versus temperature. XY-cut has 0 frequency error around 25-30°С, which gives best results for wristwatches on your hand.

By choosing more complex cut planes - you can get curve with 2 crossing of 0 over wider temperature range. This is how we got AT-cut (99% of quartz crystals are of this type) and SC-cut (they are more suitable for ovenized quartz generators as they have flat region at elevated temperatures).

Older mechanical oscillators had no such ability and were linear, without any intrinsic first order compensation (and had much more external factors to consider - remaining power reserve, vector of gravity, magnetic field).

But the world made full cycle here and returning back to mechanical oscillators - MEMS-oscillators with all their dependency of external factors and lack of first-order self-compensation. All external factors had to be calibrated and compensated. In order to reach high Q-factor MEMS oscillators had to operate in vacuum - which make them susceptible to helium leaks (you might have heard about recent issues of inability of recent iPhones to operate in 2% helium atmosphere). All this is for reduced package size (especially thickness) and unified manufacturing materials.

But quartz will always have it's use due to combination of many advantages (low CTE, piezoelectric effect, ability to do a first-order frequency compensation, low jitter).

I was unable to reach 600x overclocking to cover 10 minutes in 1 second, but even 582x is extremely fast for mechanical system.

All these high frequencies are resonant, and only a couple of Hz wide. If you go 2-3 Hz lower - watches will go backward:

The hardest part of this article was not etching microchip in boiling acid. It was filming watch to hear it tick. Modern world make us too used to noise. I even had to move signal generator to a different room with a really long cable to get rid of 50Hz hum of it's power supply which I never heard before. 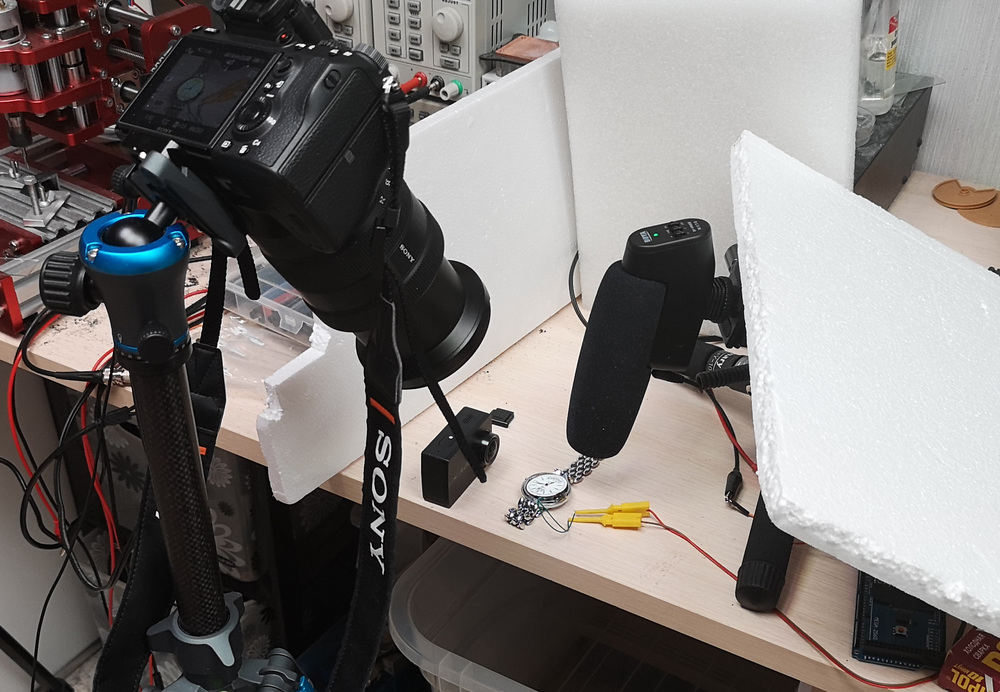