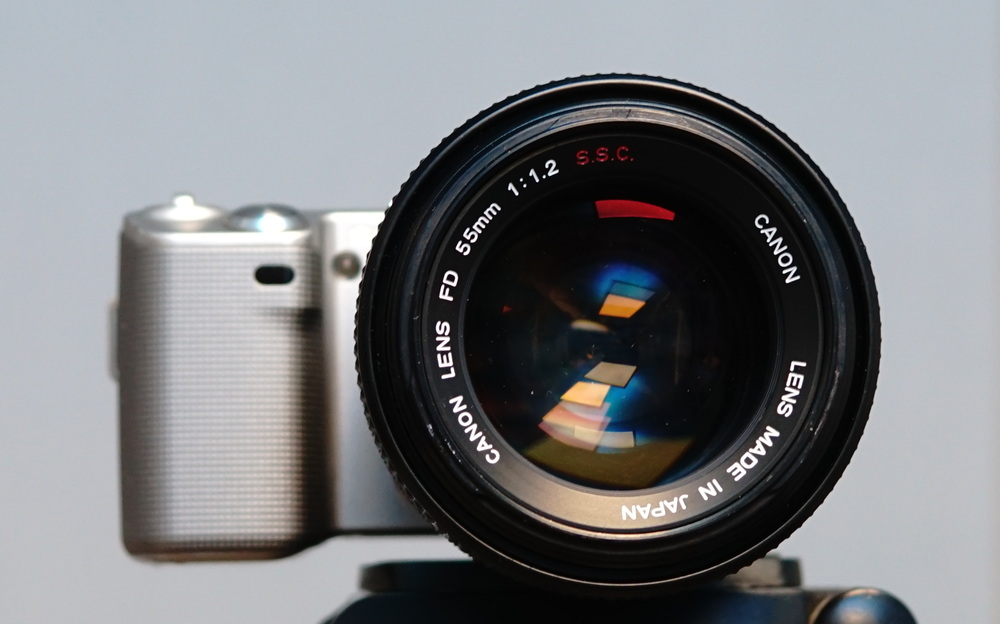 As an amateur photographer from the very childhood I was quite "spoiled" by fast lenses: my first photos were made by "Zenit" camera with one of the greatest Soviet lenses - Helios 44 (58mm, F2). After getting a digital SLR - Sony a100 I got Sony 50mm F1.4. So I never felt that fast apertures are hard to work with or tricky to focus because that's the only thing I was using.

Next step might have been going for F1.2 - but there are no F1.2 lenses made for Sony/Minolta A-mount at the moment. Apparently I had to dig deeper into the hystory of manual lenses. Manual Minolta MD lens might have been an obvious choise, but it's flange focal distance is smaller than one of Minolta A, so making passive adapter is impossible. Adapter with lens is possible, but it would work as light teleconverter, reduce image quality, make the lens slower which would ruin the whole idea. Canon FL/FD have even shorter flange focal distances. Nikon F-mount lenses have a bit larger flange focal distance (+1.9mm), but it seems that building mechanical adapter with such thickness is impossible. So this all rules our any adoptation of almost all F1.2 lenses on Sony A-mount cameras.

The only exception seems to be M42 F1.2 ones, which are rare and expensive. So I might need a different camera with shorter flange focal distance in this journey.

"New" Sony E-mount has almost the shortest flange focal distance among APS-C cameras and hence the most universal - so I picked up used Nex 5 on ebay for 120$ shipped. Among old (60's, 70's and 80's) manual F1.2 lenses on the market - Minolta MD are quite expensive, 400$+, plus M42 ones which are 600$+. Nikon in the middle and Canon being the cheapest, ~200$. Older Canon FL 58mm F1.2 - too old with simpler coating, and newer Canon 55mm F1.2 SSC are much better. Also I should mention Canon FD 55mm F1.2 Aspherical - probably the first commercial mass-manufactured lens with aspheric element which was making it so expensive. They are still sells up to 1000$ used. Looking at this one could really feel the joy of progress while buying something like Sigma 30mm DN F2.8 with 2 molded aspherical elements for mere 165-200$... 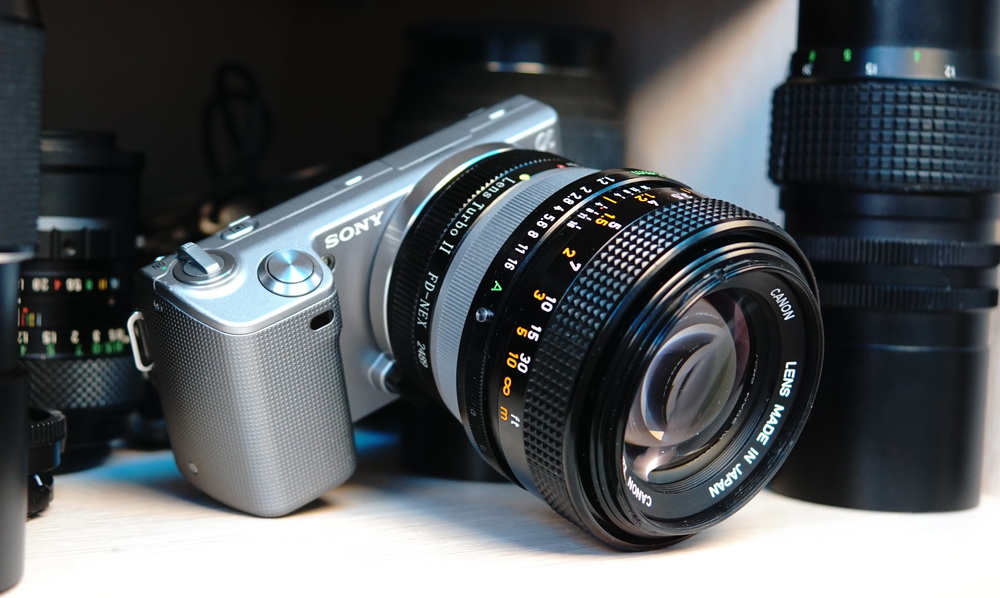 I could have used it with passive adapter, but for E-mount it is possible to make focal reducer which will fit whole full-frame into APS-C sensor - for example 150$ Zhongyi (Mitakon) Lens Turbo II FD->E-mount (this way it is also possible to use M42 lenses with passive M42->FD adapter). It seems Ver.II differs from first version in coating - old version had purple spot at the center of the image in some conditions (probably IR reflection from coating)

With reducer 55mm lens effectively becomes 0.726x55=40mm F0.85(!!!) one. Adapter has 4 elements including ED one, no complaints on build quality. Focal reducers require as short as possible distance to the sensor (that's why they were impossible on SLR cameras), so last element is "squared" to fit in. Adapter mount is designed so that you don't rotate it when securing: 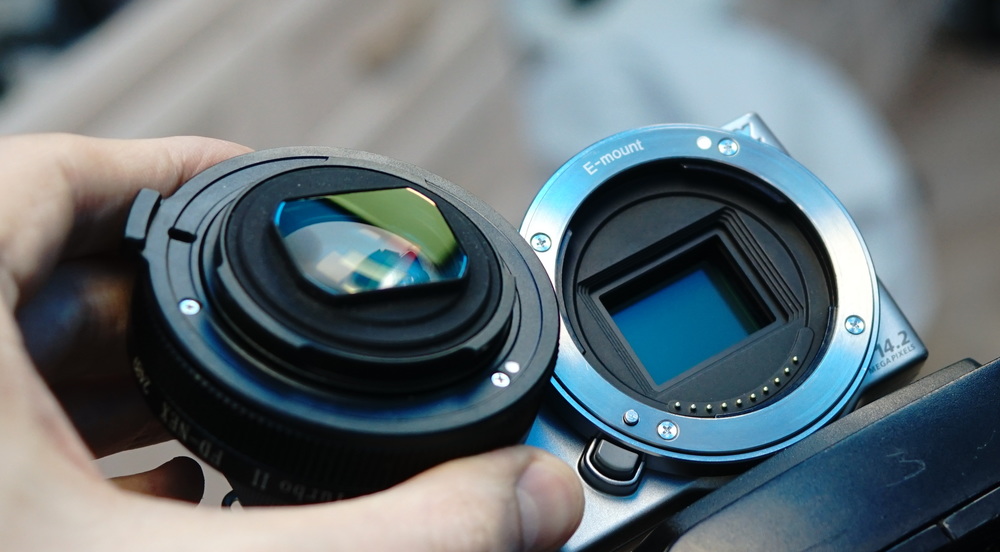 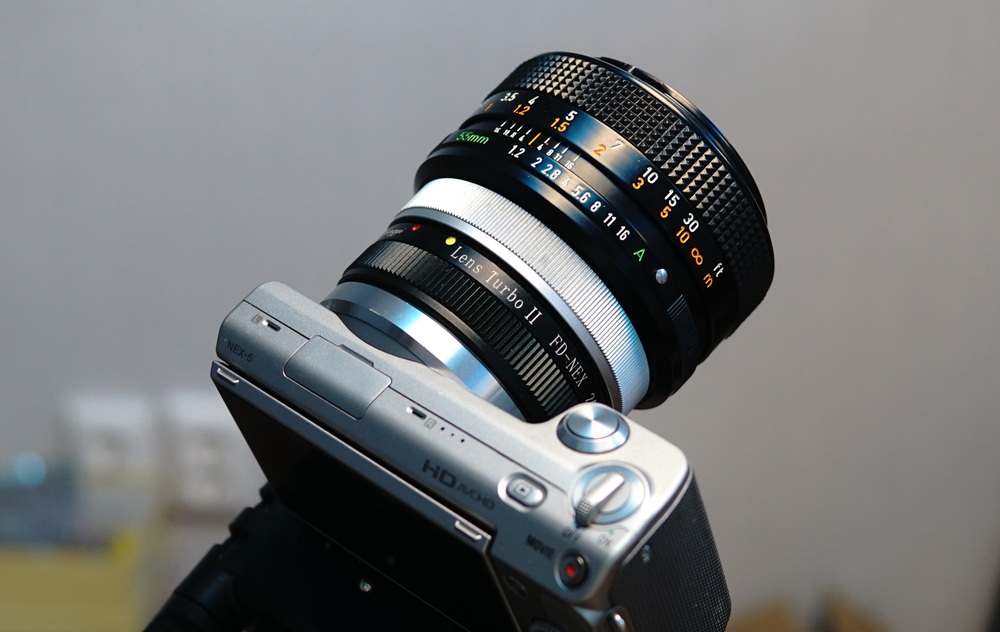 Francly speaking, these results looks much better than I expected. Other than some vignetting, corner sharpness is ok and chromatic aberrations are also not bad (hardly visible on text, more so on the lamp in the corner). Luckily for us Lens Turbo II did the great job on F1.2 lens! :-)

Let's compare this to more conventional lenses. Here is a shot on Canon 55mm F1.2+Lens Turbo II: (F0.85)
Crisp image plane is very narrow (as expected). Hair is mostly out of focus, but I really like overall result: 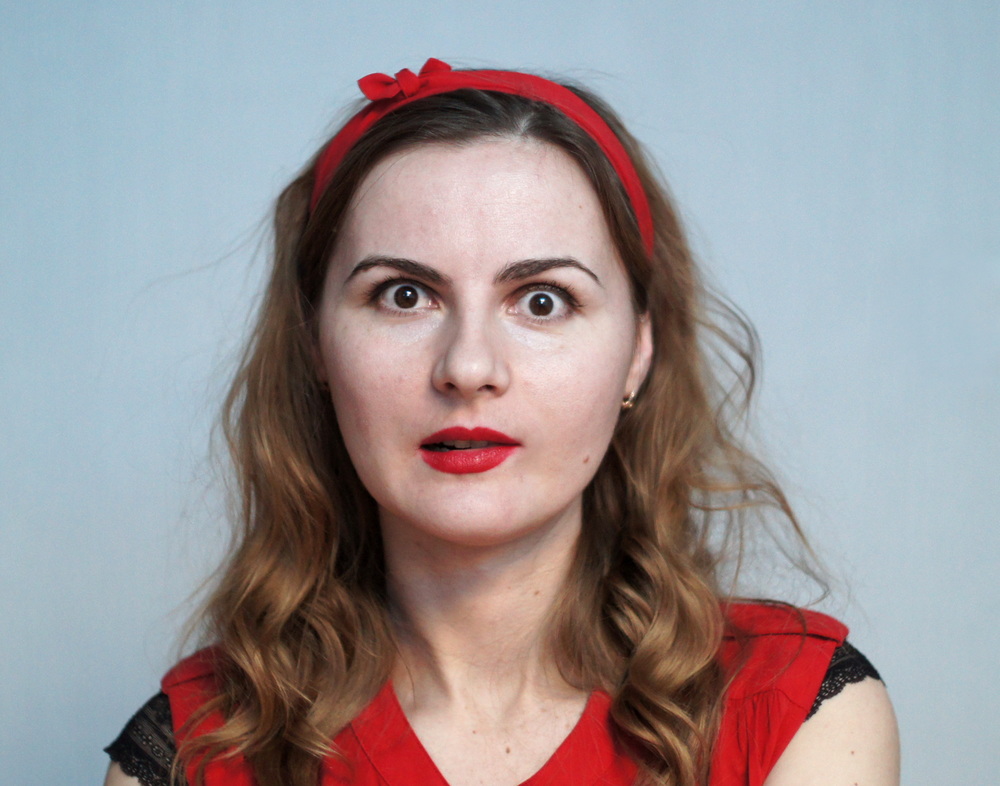 Same photo on Sony DT 30mm F2.8, it's all sharp here, you can also see how much less blur on the background we have here: 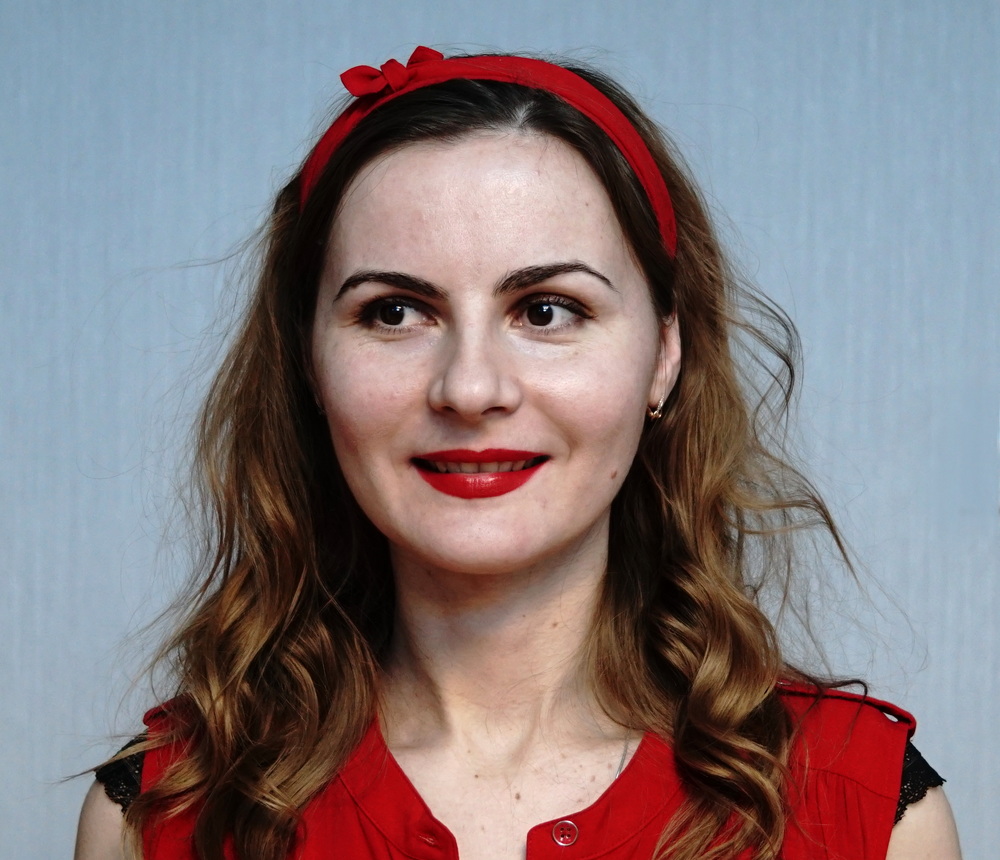 Resume: Zhongyi Lens Turbo II works just fine even for F1.2 lenses. Chinese engineers did a good job here.
Canon 55mm F1.2 is a nice, comparatively inexpensive lens, F1.2/F0.85 is not that scary after all.
Discussion - on the forum