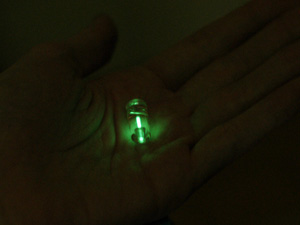 It appeared that there are guys who did developed homemade processors as a hobby. They are usually made out of low-scale microchips (registers, counters, e.t.c) or low level discrete elements (transistors, relays). The only big chips used are memory and flash memory.
In this article I want to do a brief on architecture of homemade processors and show some greatest processors made at home.
Read more →

Lately some of internet community was shocked by a missed 7 meter meteorite, which was detected just 15 hours before minimal distance to Earth, and that showed that we are still under risk of going Dinosaur way – have a breakfast, and then suddenly die due to meteorite impact

Some might say "Hey, this 7 meter meteorite is so tiny to cause any damage". I am not going just believe that, let's find out by ourselves!

I'll show you that meteorite damage assessment is not something available for eggheads only: you might find all required information and tools for that in the internet, and I'll show you how :-)

The only thing you should remember from School physics course is that every moving body have kinetic energy, and whatever you do with that body – amount of energy is preserved. I.e. when meteorite hit the Earth – this energy gets converted to heat of explosion and shock-wave.
Read more →

Recently I've tried to bring some attention to Atom-based servers for private web-hosting. There were many skeptical about this idea: "How can cheap netbook processor work in a server?". Now some companies provide collocation for atom-based nettops for a reduced price (~30$, usual price for 1U server is around 100$), and I wanted to share my experiences after using such server for a month. My experiences of Google AppEngine usage

Warning! This article was written in the first months of Google AppEngine. Today it is completely obsolete.

Disclaimer: This article is not about "I am so clever, Google is so stupid". This article is about some Google AppEngine problems (or peculiarities) which might not be obvious for newcomers.

You know, Google did really nice things: great search, and awesome mail. It gets a lot of valuable private information about our habits through that, but we continue to use these things because they are so awesome at solving their task...

There was some hype about AppEngine lately, so I’ve decided to give it a try in my new project.
I’ve chosen Python with Google’s native libraries to ensure best compatibility & performance.
I’ve started from the performance tests, and the results were…. Disappointing:
Read more →

Once Upon A Time, we've decided to celebrate release of the new version of software that we were developing: Knova 6.6. Our team was 6 developers (boys

). As a party place we selected the shore of Beresina river near the legendary Belarusian city Bobruisk. We selected this place because it's at the middle between Gomel (Developers were from Gomel) and Minsk (Testers were from Minsk). Also, the nature is beautiful there.
You can read about these places in classic Russian literature - "The Golden Calf" (Zolotoi telenok) written in 1931 by Ilya Ilf, Evgeny Petrov. Here is the extract:

"How's that? All of the plateau?" Balaganov taunted.
And why not add Melitopol, or perhaps Bobruisk?

At the mention of Bobruisk the entire convention moaned painfully. Everybody was ready to go to Bobruisk immediately. Bobruisk was considered a splendid, highly cultured place

Recently I've upgraded to AMD 939 Sempron system. Everything was excellent, except noise. I've replaced CPU cooler to Thermaltake Sonic tower (excellent cooler for not-very-hot CPUs like Sempron). But the main source of noise was chipset cooler. It was small and extremely noisy.

So, I’ve decided to make a new cooler from old 939 one. Of course it’s too big to be set on chipset. So I’ve sawed it on 2 parts. Then I’ve glued this radiator instead the old one.
Read more →

That was my second visit to the USA. This time it was again at Silicon Valley, California.

We’ve lived and worked at Cupertino city for 5 weeks. At the weekends we usually visited some interesting places like national parks, ocean, shops

. So, here is some photos about this trip: